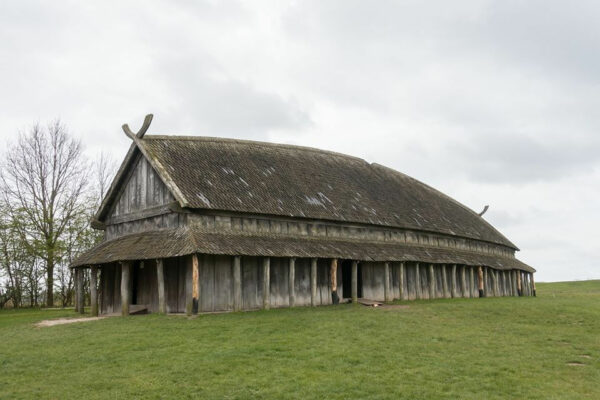 It was the stench that warned us what we would find as Silvia and I approached the longhouse.

We’d already done a cursory search everywhere else, saving the large residential building for last by mutual silent agreement.  Like we both knew whatever had happened here was beyond terrible and we were both avoiding discovering whatever it was as long as possible.

As with most farmsteads in our lands, Haithabu had a number of barns, sheds, granaries, and smokehouses scattered about within the village proper as well as along the edges of the fields, pastures, and forest tree line.  The flour mill was easily the largest building besides the longhouse, but its waterwheel was still, like so much else in the village.  There were the longships, the freight ships, and the small boats all moored at the docks lining the river banks, bobbing placidly in the water’s current.  The creaking of ropes and hollow knocking of ship hulls against wooden pilings loud and eerie in the unnatural silence.

No one was working with the boats.  No one was at the mill.  No dogs, no cats.  No cows or sheep or pigs milled about in the livestock pens, no chickens scratched for feed in the dirt, and no horses stamped their feet against the cold in their paddocks.  All of the animals seemed to have fled, the fences of their enclosures trampled and broken. There wasn’t even the sound of birds in the surrounding woods.

Unless the entire village of over a dozen families had up and vanished, the only place they could possibly be was in the longhouse.

Hikko had watched us search the other buildings from where she sat in the middle of the path leading to the main doors of Haithabu’s Hall.  She didn’t bother following us as we studied the churned mud around the busted-up animal enclosures studying the tracks and she patiently waited as we worked our way up to confronting whatever horror waited for us inside.

“Oh, Auntie, I think I’m going to be sick,” I murmured into the hand I clamped over my nose and mouth when she opened the door.

Silvia grimaced but otherwise contained her disgust, allowing only grim determination to show.  She reached into one of medicine bags on her belt and withdrew and handful of thin fabric that peeled apart into two linen cloths embroidered with runes for good health and warding against wickedness.  She handed one to me and I didn’t hesitate to press it to my lower face.

“Do only as I do,” she said to me, then she led the way into the darkened doorway.

I looked back over my shoulder at Hikko.

“Are you coming?” I asked her, muffled through the cloth that smelled of mint and lavender.  It hardly made a difference to the appalling smell spewing out of the longhouse, but I’d take it anyway.

The snow fox sneezed violently, shaking her head and taking a deliberate step back.

“Yeah, wish I could hang back with you.  Any advice?”

Hikko sat and tucked her front paws in tightly to her belly, her tail wrapping around her toes.

“Right.  Keep my hands to myself and don’t touch anything,” I said.  I took one last deep breath of mostly clean air and followed Silvia inside.

I had to stop just over the threshold to let my eyes adjust.  The central hearth fire had gone out long ago.  Motion in the shadows in front of me slowly resolved into Silvia trying to bring a little light to our situation. There was a dim red glow as she stirred the coals, the last dying embers sending up sparks as she stuck some twigs and straw into them.

When they caught, she carefully transferred the tiny flame to an oil lamp she’d found sitting on the stone hearth.  With my vision adapted to the dark, I looked around, sure that I’d find… yes, there it was.  My fumbling hand took down a larger oil-fed lantern from a hook on the wall to the right of the door and I brought it over so that Silvia could light it too.

We turned up the wicks so we could see what we were doing, then without speaking we each turned to take stock of our own sides of the longhouse.

Nearly all village longhouses had the same layout.  One end would be for housing the livestock when the weather turned foul, the other end would be where artisans would craft their wares.  In the middle was where the people lived, with the large central fire for warmth, light, and cooking.  Built-in benches crowded around the stone hearth, but behind those were the sleeping pallets and chests where the people would have kept all of their personal possessions.

And that’s where I found the people of Haithabu… or what was left of them.

“Oh, dear, sweet Eir preserve me,” I whispered under my breath before choking down burning bile.

There was a small family; a man, a woman, and a child of perhaps four or five.  It was hard to tell for sure.  It was hard to know if the child was a boy or girl.  They were bloated, the skin of their face waxy and mottled with dark splotches.  The family had to have been dead at least three days, maybe longer.  It was winter.  Decay would have been slowed by the cold.  From the nauseating smell of them, I thought I detected stale vomit and bloody flux.  I wasn’t about to lift the blanket to get visual confirmation of what my nose was telling me.

In the next pallet, a trio of young women—sisters, perhaps—died covered in a rash of spots.

I lurched a bit as I stepped away from them and suppressed another bout of gagging before moving on to the next pallet.  This time it was an older couple, maybe the grandparents of the first family.  I held the lantern over them and immediately wished I could un-see what it showed me.

Those poor elderly people were covered in lesions crusted over with old blood and puss.  At least what I could see of their exposed skin was.  I had a desperate wish for a long hot bath and some blessed answers, because what I was seeing here was making no sense.

“Auntie Silvia,” I called after looking over another young family that were covered in horrible cancerous growths.  “I…I don’t know what I’m seeing here.”

I heard the rustling of cloth and feathers as she came over to my side.  She held her lamp over a few of the beds I’d looked at.  She shook her head, then motioned for me to follow her back outside.

I was only too happy to go with her.  I didn’t run through the door but I definitely moved with haste and didn’t stop until I was several paces away from the longhouse.  Far enough away that when I took some deep breaths mostly all I smelled was snow and damp earth and the relatively clean scent of the stock pen I was facing.

Now if only I could get rid of the taste at the back of my tongue.

“When was the last anyone heard from the people here?” Auntie Silvia asked me as she came to a stop beside me and leaned her staff against the top rail of the pen’s fencing.  She wasn’t looking at the longhouse either.

“A week.  We got in a consignment of flour, wool, and pickled herring,” I told her, spitting over the rail to try and rid my mouth of the taste of death.  “The ship’s crew said nothing of any sickness here.”

“And they’ve all been dead for three days at least.  Possibly as many as five,” Silvia said and I could hear the frown in her voice.  “Which means every single member of this community contracted and died of one disease or another within two to three days.”

I shook my head, not denying her words so much as in perplexity.  “That makes no sense.  Maybe dysentery kills that fast, but not the pox.  Not the Black Death.  And those growths?  What were those, cancer?  That’s not even contagious!”

“And they couldn’t have grown and killed within days,” she agreed.  The feathers of her cloak rustled as her shoulders rose and fell with her sigh.  “I do not understand what has happened here.  I must consult my books.  And I must tell the chieftain as soon as possible.”

Just then, the sound of hoofbeats broke the unnatural silence.  Moments later, Gunnar and his soldiers rode out of the woods.

Auntie Silvia took up her staff again and shook out the folds of her cloak, readying herself to take her raven form and fly.  “Fire the longhouse.  Make sure it burns completely to the ground, then salt the ashes.  You know the rituals.”

It wasn’t a question, but I answered it anyway.  “I remember what you taught me, Auntie.”

“Good,” she said with a nod, then the edges of her feathered cloak flared and a giant purple-black raven launched into the air to wing herself back to Hovegarden.

Gunner and his band were slowing from a cantor to a trot as they came closer.  While I waited for them, I glanced down at the fox that had slunk up to sit on my other side.

“I’m still mad about you biting me,” I told Hikko, who flicked an ear without remorse.

I scowled at her some more, but it hurt my face so I stopped.  Besides, I couldn’t hold on to my anger.  “Thank you for showing us this.  Whatever’s happening, it’s better to know than not know.  You have anything else to tell me?”

The fox blinked at me and I blinked back, frowning anew.  I could have sworn that Hikko’s eyes were golden, like all the fox eyes I’d ever seen, but now they were a pale blueish white.

Then my mouth dropped open as I heard her speak and her voice was as clear and real as my own.

“Brace yourself.  This is only the edge of the storm.”

“That’ll be ten pennies to me, then,” Gunner said to me as I knelt so I cou…
Author's Blog, Free Fiction

The sun was setting as Gunner and I climbed out of the boat and hauled it u…
Author's Blog, Free Fiction

I’ll take a moment here to make an observation: to wit, that there is a key…