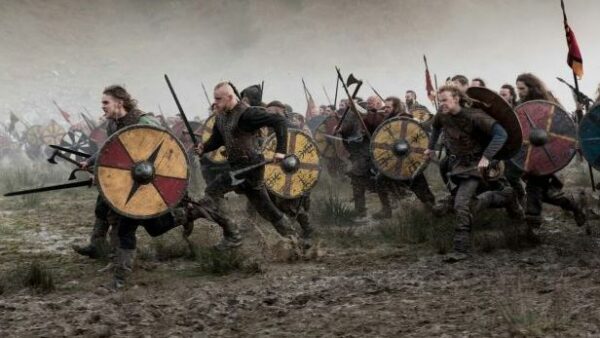 The sun was setting as Gunner and I climbed out of the boat and hauled it up to the narrow strip of rocky turf that made up this section of the riverbank.  The river’s current was moving briskly and we’d kept up a decent rowing pace; even so, I was worried we wouldn’t be in time.  My only consolation was knowing my mother would wait for the cover of night before launching her ambush.

Further downriver, we could make out the orange glow of campfires in the darkening twilight.  The Light Tower soldiers had made camp in one of the grazing fields that opened up at the feet of Shipki Pass.  The Albe hugged the eastern side of the valley, rushing past the meadow the invading force now occupied before crashing through the gorge that cleaved the craggy mountains fortifying our southern border.

At the north end of the valley was a small collection of buildings.  Sheds, barns and a cabin with fenced-in animal pens were all empty.  The shepherds that used this valley in the summer had taken their herds to winter in the next valley over, on the leeward side of the mountains where the snowpack was lighter.  My mother and her warriors would have come upon those buildings on the road from Hovegarden into this valley, but that wasn’t where they would start their attack.

Without speaking, we both set out for the cabin and the path beyond it that would take us up into the dense woods covering the western hills.

The snow was thick but not fresh.  We hadn’t had any storms recently and a nice hard icy crust had formed so we didn’t need to break a trail.  That was nice.  I’d had a very long day and my arms were as heavy as lead bars at my sides after all the rowing.  Running through knee-deep powder would have been beyond miserable.  The Fates smiled on us again with a new moon and cloud cover obscuring the stars.  We were only a pair of dark shadows moving in the distance, hopefully mistaken for deer by any Light Tower soldiers who happened to be looking our way.

Up under the trees, it was even darker, nearly completely black, but I could just make out the path leading back towards the pass, so I risked taking a tumble and kept our pace at a jog.

Behind me, I heard the sound of a large body thudding to the ground amidst stifled cursing.

I slowed to a stop and turned to find Gunner lurching back up to his feet and knocking snow off his front.

“What’s the matter with you?” I hissed at him, chafing at the delay.

I couldn’t actually see his face, but I could picture the glare he was shooting my way well enough.  “I can’t bloody see,” he hissed back at me.  “Slow down!”

“We don’t have time!  Since when have you gone blind?  The path’s right there, just watch where you put your oafish feet!”

“It’s pitch black, Princess!  I don’t know how you’re able to see anything, but I need a light if you want to keep running headlong through the trees.”

Frustration came off him in waves I could practically feel like heat, but he reached out a hand and gripped my shoulder and we moved out again.

Trying to run while keeping Gunner from careening into trees or falling on his face was impossible, which meant we were forced to a fast march instead.  All the while I grit my teeth in impatience.  I had no idea why he’d suddenly gone night blind.  Yes, it was dark, but there was still enough ambient light reflecting from the snow that our way was clear enough to me.

But I had no time to dwell on the mystery.  Night had well and truly fallen and the glow from the campfires were dwindling as the invaders turned in and let their flames die down.  Gunner and I had worked our way down the length of the valley until we were nearly parallel the Light Tower encampment before I finally caught a glimpse of dim red rune light coming from up ahead on our path.

Kharma and her troops were spread out in a loose formation, scattered amidst the trees.  Many were on horseback, but most were on foot, including my mother who towered over almost everyone around her, especially given the two tall demon horns adorning her battle helm.

The rest of her armor was lost to the darkness, but I didn’t need to see the details to know she was dressed as ludicrously as ever; a cross between plate and scale armor covered her chest, torso, and hips so closely molded to her figure that it left no room for any serious padding or insulation.  And while she did have a billowing cloak the same dark blue as the tattooed lines over her eyes and chin affixed to her shoulder pauldrons, not a stitch of cloth or scrap of metal covered her arms and only knee-high armored boots protected her bare legs.

If you’re thinking that she should have been frozen solid out here in the middle of the snow-covered mountains at night, you should have been right, but no.  My mother was impervious to the cold, just as she was inhumanly strong, which was the only reason she could wield her massive broadsword Wind Slayer.  The giant blade carved of glowing glacial ice and inlaid with gold was as tall as she was and very nearly as wide.

Kharma was just lifting the blade into a ready position to signal the charge when I threw myself in front of her, chest heaving in gasps and arms thrown wide, hands palm out.

My mother stared at me with her stone face in the dim red glow of the rune lights her soldiers were holding.  It was the expression she wore when she was less than amused by my insubordinate outbursts and was about to pull rank.

“I will not abide armed outsiders invading Isabrot lands.”

“Do you even know why they’re here,” I asked.  “Did they not send a herald announcing their intentions?”

My mother made a dismissive gesture with the huge round shield she gripped in the hand not holding Wind Slayer.  “Their messenger claims this legion was sent by Aldin to reinforce Bahadore’s Ice Wall.”

“Then why are you attacking them?” I demanded incredulously.

“Because it is obviously a ruse meant to make us relax our guard,” Kharma growled.  Aldin has no love for Isabrot, only an obsession with controlling all of Antia’s factions.  I see this Light Tower army for what it is—Aldin’s right hand reaching out to strangle us into submission, but I will not submit.”

“You’re going to start a war, mother.  One we cannot afford.  Not right now.  There’s something gone terribly wrong in Haithabu, and it’s only the beginning.  We need—”

Kharma cut me off with a slash of her sword through the space between us.  “Enough!  Silvia has already told me of the deaths at the homestead.  I will address them once I’ve dealt the invaders.”

She turned her head to look over my shoulder at Gunner who stood behind me.  “Safeguard the heir.  She is not to participate in the fighting.  If need be, take her back to Hovegarden.”

“Yes, Chieftain,” Gunner said, clapping a hand onto my shoulder.

I shoved it off.

But she was done with me.  She stabbed Wind Slayer into the air above her head and called, “To me!”

And then she charged the Light Tower camp with one hundred of Isabrot’s bravest warriors roaring after her.

“That’ll be ten pennies to me, then,” Gunner said to me as I knelt so I cou…
Author's Blog, Free Fiction

I’ll take a moment here to make an observation: to wit, that there is a key…
Free Fiction