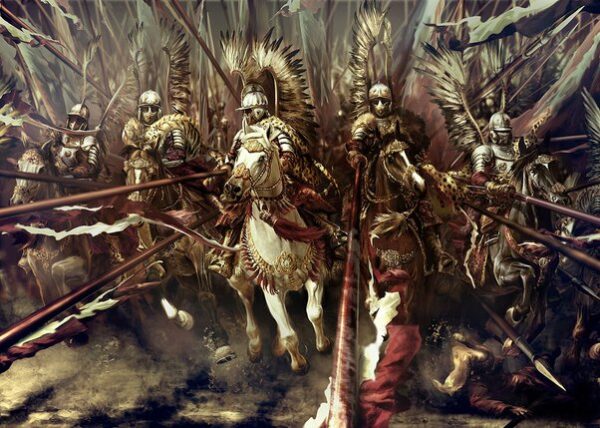 “That’ll be ten pennies to me, then,” Gunner said to me as I knelt so I could rifle through my pack.  “Pay up.”

“Why would I pay you anything?” I demanded as I roughly shoved notebooks and gear around in my neatly organized pack, wondering why it was the one thing you wanted always seemed to find its way to the bottom of your bag.

“Because I won the bet.  You never had a chance of convincing the Chieftain of staying her attack,” he replied and I could hear that infuriating grin in his voice, which only stoked my anger hotter.

“First off, we never made any such bet.  And second, don’t talk to me, you traitor,” I snapped at him.

My fingers brushed against cold metal and I huffed out a breath of triumph as I drew out a spyglass.  Collapsed down, it was a brass tube that fit comfortably in my hand.  Extended, it was the length of my forearm, it’s three segments covered in some kind of elaborate engravings.

The markings weren’t runes, so I didn’t know what they meant individually, but I believed that they were why this particular spyglass could magnify distant objects so much more clearly than other telescopes and allow the viewer to pierce the darkness of night as though it were midday.  I’d bought it off a kid named Bruno who sailed with Captain Pearl aboard the pirate ship Liberty.  The only reason he’d been willing to part with it was because he’d made himself an even better one that could also see the stars in broad daylight.

I stood and stretched the spyglass to its fullest extension, squinting through the smaller end and trying to track the charging warriors as they descended on the slumbering Light Tower camp.

Gunner moved up to stand at my shoulder looking out through the trees at the field, though I doubted he could make out anything that was happening.

“You and I must have different definitions of what it means to be a traitor, Princess,” he said without heat.  “Following the orders of your chieftain demonstrates fealty, surely.”

I gave a derisive snort at that.  “More like blind obedience.  If you wanted to show your dedication to your people, you’d be willing to stand up for what’s best for them, even if that means defying orders.”

“I’ll be sure to remind you of that when you’re the Chieftain and I ignore your orders for the good of the people,” he laughed.  “So, what’s going on out there?  I can’t see a thing.”

“There’s movement amongst the tents,” I reported grimly.  “All that roaring and hollering gave away our surprise.  Now they know we’re coming.  So stupid!”

“’All that roaring’ makes it sound as though a thousand warriors are swooping down on them.  It intimidates the enemy and adds to their fear and confusion,” he argued, taking my mother’s side again.

“Based on the number of tents down there, there’s got to be a full legion,” I said, my gut shriveling up into a tight knot of anxiety.  “Our people are outnumbered ten to one.”

Gunner made a noise deep in his throat that might have been worried or merely thoughtful.  “Your mother has faced worse odds and come away victorious.  Look, see?  There!”

A glacial green light flared, lighting up the night and I recognized Wind Slayer, my mother’s giant broadsword going to work.  If she didn’t kill her opponent with one mighty blow, the sword inflicted a crippling frost on them and their nearest neighbors.  If they’d already been frosted, Wind Slayer froze them entirely, at least for a few minutes.

A few minutes was an eternity in the opening moments of an ambush.

Now there were sounds of battle beginning in earnest.  Battle cries rising up amidst shouts of alarm and orders being bellowed out over the clash of swords on shields and armor.

I was far from the battle, tucked up into the tree line covering the sloping foothills of the valley, but the clamor of combat rang loud in my ears all the same.  It had to be my imagination, but I could have sworn I was able to make out my mother’s voice soaring above all the frenzied noise, leading our warriors in a classic battle hymn.

A harsh cawing pierced the cold darkness and an enormous raven, its midnight blue feathers trailing snow and blistering cold.  Auntie Silvia swooped down on the battle, circled it once, then snapped her huge wings wide open to unleash a momentary blizzard.

Every enemy combatant was instantly rimed with hoarfrost, the thin covering of glowing ice breathed ghostly mist out over the whole scene and mired the Light Tower soldiers in clothes and armor grown suddenly stiff and heavy.

And then my mother really got down to business, laying about her with Wind Slayer and turning whole teams of frosted Light Tower soldiers into blocks of ice, neutralizing them.  Kharma was the tip of the spear, thrusting herself deep inside the soldiers’ formation and using the shock and awe of her sheer size, the horror of seeing their comrades flash-frozen into ice sculptures, the ferocity of the warriors following in her wake and the disorientation of being jolted out of sleep by a surprise attack to wreak absolute havoc on their disciplined ranks.

This was how Kharma had led our people to victory against the hordes of Dark forces that have laid siege to Bahadore’s Ice Wall since time immemorial.  Her tactics were simple and brutish and had worked for her in battle after battle, with each victory providing grist for the skalds who wrote odes to her military prowess.

And yet, tonight, something felt wrong…

“You see?” said Gunner who waved out at the rapid flashes of blue and green phantom light as Kharma and Silvia unleashed a continuous barrage of attacks on the Light Tower soldiers.  “She has them right where she wants them.”

I didn’t respond, too focused on catching the random flickering of a different magic playing out, something I’d never seen before.  It was a golden glimmer.  It wasn’t consistent, and it didn’t seem to be tied to any arcane attacks launched by the Light Tower soldiers I could see.  Instead, the flares of golden light seemed linked to the attacks our people were delivering.  But I couldn’t be certain because not all blows resulted in a golden flare.

Even so, when the gold light did flash, the enemy soldier seemed revived or rejuvenated.  I saw one of the invaders on the edge of the battle closest to me take a slash from an ax at his shoulder.  Darkness spread from the wound very briefly, then golden light bloomed from the gash and even the bloodstain was gone.

“What in the—” I began to say, but cut off when sunbeams burst from somewhere near the center of the camp, splitting and branching out to touch each and every soldier.  And now, with the tether of glittering sunlight on their backs, the soldiers could shrug off strikes that should have taken them to their knees, only slightly staggered.

And slowly, as the battle wore on, the dynamics began to shift.  Surprise was gone, now, and these were still a legion of Antia’s best fighters.  With shock giving way to discipline and bone-deep training and condition, the Light Tower soldiers were regrouping, forming up around wagons whose covers were being pulled away to reveal advanced shielding and weapons of a design that looked very modern and sophisticated.

I swore and collapsed the telescope with a smack.  “I’ve got to get down there.  I need to get closer so I can shoot those gunners before they get those weapons aimed.”

I spun to grab Snow Wind, my bow, and stopped cold.

The bow string was missing.

I whirled on Gunner, teeth bared, and swore again more harshly, using a particularly unflattering descriptor of his manhood. “Give it back! I snarled at him.

Gunner only raised his fist up high and shook his head.  “Sorry, Princess.  You heard our chieftain.  You’re not to get involved.”

I lunged at him, grabbed a fistful of the front of his cloak and used it to jump a little higher, trying to grab his wrist and drag his arm down to pry my bow string from his clenched fingers.

Of course, it was useless.  The man stood sturdy as an oak as he pushed me back with his other hand against my chest.

I opened my mouth to call him all sorts of other foul names but froze instead.  A sound like thunder was growing steadily stronger, coming from the mouth of the pass.

I spun away from Gunner, fumbling over the churned snow where I’d dropped the telescope.

“What is it?” Gunner demanded.  “What’s happening?”

I scooped up the spyglass, yanked it to its full extension again, and swept it around until I found them; the cavalry that had been waiting over the craggy hills that bound the river’s southern bank near the gorge.

Steel armor glinted in the flares of light from the battle on over a hundred more of the enemy as the horsemen galloped over the field in a wedge formation.  The lead rider leveled a great lance at Kharma, who stood tall in a stretch of ground temporarily cleared of tents and troops.

My mother turned, saw the charging cavalry, thrust her great sword into the air, and screamed her fury before rushing at the lance bearer.

But the bottom fell out of my gut, because I recognized this maneuver from the books on warfare tactics I’d read.  This was a pincer move, meant to flank an opponent and pound them between your two forces, like raw iron between a hammer and an anvil.

“What?” Gunner demanded, grabbing at the telescope I had pressed to my eye.

“It’s a trap!” I snapped back at him.  I let him have the spyglass without a fight, because that meant he was too busy trying to see what was happening in the battle to notice he’d dropped my bow sting.

I snatched it up, strung it onto my bow, which I’d swiped from the ground, then ran to the defense of our people before Gunner could stop me.

The sun was setting as Gunner and I climbed out of the boat and hauled it u…
Author's Blog, Free Fiction

I’ll take a moment here to make an observation: to wit, that there is a key…
Free Fiction